Is It Good To Switch In A Houston LED Lighting?

The LED technology has made significant strides over the past few years. Today’s LEDs have a longer lifespan of more than 400,000hrs. And some of the best models are available with custom CRIs, Kelvin temperatures, and unique optics. Overall, all the LEDs are energy-efficient solutions.

LEDs are distinctively directional, which means they emit a light that travels in a specific direction. With fluorescent and HID lamps, the light flows in all directions; as such, there is a lot of wasted light. The directional lighting synonymous with LEDs thus limits the wastage of light, and this translates to higher efficiency and lower wattage consumptions.

The lack of a filament means that LEDs, and unlike the HID and Fluorescent bulbs, are more resistant to damage. They are categories in the group of solid-state lighting solutions. They can withstand bumping and jarring. LEDs do not contain any mercury and generate little heat compared to their predicator technologies. 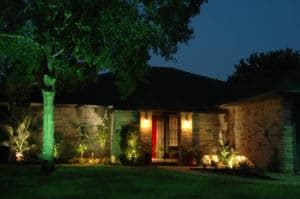 LEDs rely on semiconductor diodes mostly known as light-emitting diodes that radiate electroluminescence when electricity passes through in a forward motion. The flowing electrons in the current move through the semiconductor and fall into other energy levels while on transit to the P-N junction. The electron transition into a lower energy level that causes them to emit a photon of light. The photo might be infrared, with that spectrum, into ultraviolet light, or anywhere on the visible light spectrum.

Initially, the LEDs were made with the diodes that were wired in a line and mounted onto a heat sink. However, this set up face numerous performance limitations and issues.

The diodes were mostly installed permanently onto a solid, pre-drilled surface with holes that are specific to the LEDs being used. If one LED failed, then the entire fixture would not work. Moreover, doing upgrades was not possible, meaning there was no effective means of changing the faulty LEDs.

Currently, the technology has morphed into something more practical. The LED modules used are customizable. They are retrofittable and replaceable. The housing for the light fixtures is customized to support and enhance the capabilities of the LEDs to ensure the delivery of more lumens per watt.

The latest LEDs are upgradeable; you can change an LED module that fails just like how you would with a light bulb. As such, manufacturers can utilize the component they want in LED fixtures.

Different companies are producing light modules for various applications. That is why these modules are adaptable since they are available in changeable optics and multiple wattages.

For the LEDs to work, they need a transformer instead of the standard line voltage. The transformers or drivers convert the current into usable energy. It the same principle applied in HID fixtures. Many manufacturers produce these drivers, hence the need to research and know the driver that suits your LED installation.

The older luminaires were made with a protective lens; this is old technology but was meant to protect the ballast, light source, and driver from dirt. However, the optics used in these early LEDs cannot work the same as the latest LED lighting technologies. In as much as these luminaries are the best lighting solutions, their efficacy can be limited by poor position or the type of glass cover or lenses used.